Abstract: During the CoVID epidemics in Italy it became of great interest to investigate the number of occurred deaths, regardless of their confirmed CovID positivity. To address this problem, on April 1st the Italian National Statistical Office (Istat, Istituto Nazionale di Statistica) published the data of a selected group of Italian municipalities, making available the number of deaths observed on a daily basis from January 1st to March 21st 2020; data were stratified by gender and in class categories. To make comparisons with the previous years possible, the daily stratified number od deaths that occurred from 2015 to 2019 in the same period were also published. Later, the data were updated weekly and at the time of writing three data releases were available, which included the number of deaths up to April 4th. Istat clarified that only municipalities with at least 20% mortality increase compared to 2015-19 were included in the dataset.

The selection method was criticized by the statistical community because inference and data aggregation at provincial or regional level was problematic, as the municipalities were not a random sample. If aggregated, the observed relative risks at provincial level were expected to overestimate the true relative risks. At the time of writing Istat announced a new data release where the municipalities will not be selected based on the mortality data.

To the best of our knowledge, so far there were no attempts to aggregate the data at provincial or regional level using a method that would take into account the selection method that was used by Istat. Our aim was to provide a permutation-based approach to identify the provinces with increased overall mortality in the period between March 1st and April 4th, compared to the same period in 2015-2019. Our results, which are based on two different test statistics, identify 22 and 29 provinces (out of 103) with increased overall mortality, respectively. Most of the identified provinces are neighboring provinces in the northern regions of Lombardia, Emilia Romagna, Piemonte, Liguria, Marche and Toscana, where most of the CoVID cases and deaths were identified. The performance of the method in shown also in a {em null case}, where the mortality of 2019 is compared to 2015-18. 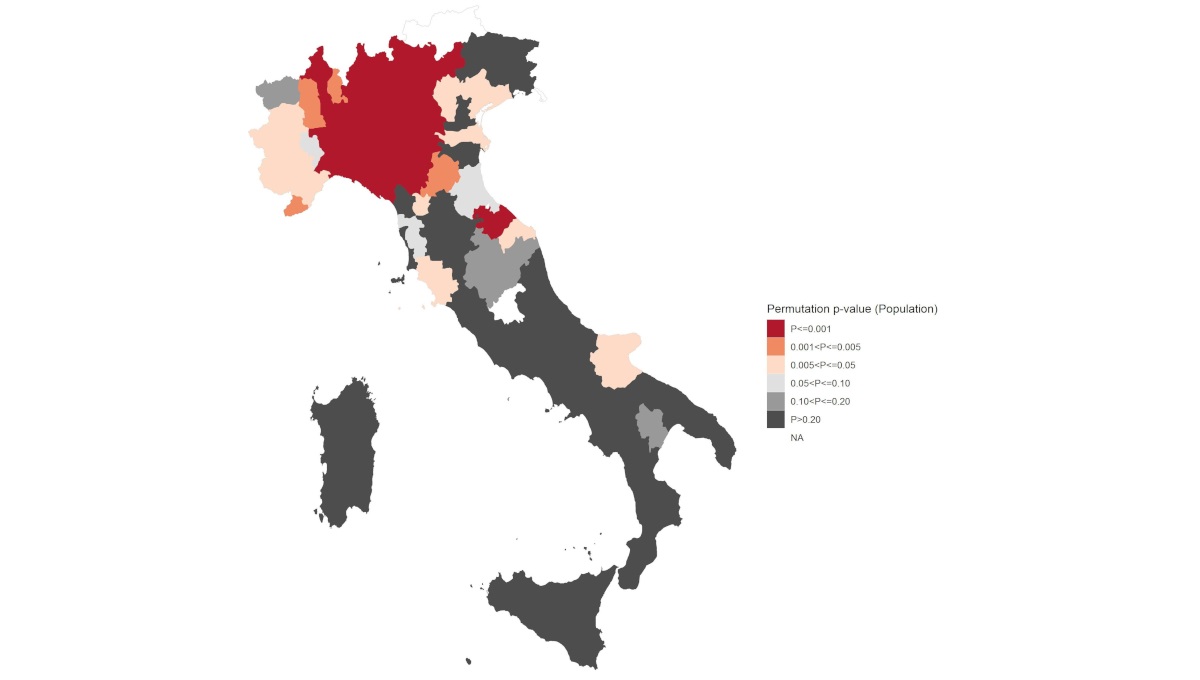 Comparison of 2020 mortality to 2015-19: geographical distribution of the permutation-based p-values based on included population